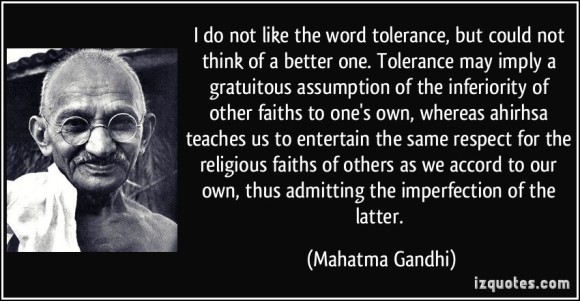 Before I start this post I think I need to state that I’m not anti-tolerance. However like my last post on the platitude of excellence, I think we might need to examine what it means.

Nicky Morgan is saying we shouldn’t shy away from promoting ‘fundamental British Values’ to the students within our school. Mutual respect, equality, tolerance and democracy. The western world is built on tolerance, we encourage it in our children, it makes the community we live in a better place. Tolerance sounds like an excellent thing to promote within schools. Tolerance I have read is a supposed virtue. We should tolerate children and in return they tolerate us. We want them to tolerate each other and this hopefully leads to a school community where we can co-exsist happily. It sounds well meant and promotes an inclusivity within the school community, something we hope that students will take beyond into society. People who are tolerant aren’t going to be violent, abusive or destructive. We should praise this sort of behaviour in our students, considering how much of it is in in the world around us.  However what does tolerance really mean?

‘The ability or willingness to tolerate the existence of opinions or behaviour that one dislikes or disagrees with.’

If we use this definition do we want to teach our students to tolerate each other? Do we want them tolerate the opposite sex, other races, other religions, other lifestyle choices? To me if we use this definition we can use tolerance as a blanket to cover our students prejudices without challenging them. It says to me that we can teach our students that it is ok dislike equality with women as long as they can tolerate it. Its says to me we can teach our students that it is ok to dislike a different religion from their own as long as they tolerate it. Tolerance means we aren’t interested in our fellow human being and that we don’t really care about them. We just end up tolerating them. If that is where British society is heading I frankly don’t want to be a part of it.

Perhaps I am misinterpreting tolerance and doing the word a disservice. Maybe in the the modern world it has taken on a higher meaning and transcended the definition of the Oxford English Dictionary. Like the word excellence I feel it may have become trendy and hyper-inflated. Surely there are other values we would we want to teach our students that are not so ambiguous like tolerance is to me. Open mindedness, being welcoming, kindness, making new friends and a willingness to embrace new ideas are values I think we should be promoting. I don’t care whether they are British Values or not, I just know they would be the ones I want no matter what country or society I lived it.

I ask myself would teaching tolerance as a value just be appeasement in disguise? Are we just allowing the children in our schools to sit on the fence, not form an opinion, voice it, justify it and see if it holds up under the scrutiny of their peers? I believe tolerance is a fence sitter and what we don’t need to teach is how not to form an opinion. Should we not help develop a moral backbone in children, providing opportunities to help them explore their own moral compass? Whilst teaching tolerance within schools may ensure things are peaceful, what happens when these students see something that requires true action? What if they witness an act of racism, of inequality or a freedom of basic human rights being denied? Will they then tolerate that? I’m not so sure that is a value I want to promote or teach to the children in my school.

Ill finish this post with another quote from Mahatma Ghandi. “We must respect other religions, even as we respect our own. Mere tolerance thereof is not enough.” Replace the word ‘religions’ with cultures, races, lifestyle choices, genders and teach that. Then maybe we might get somewhere with a set of British values I could truly get behind.

Lecturer in PE, Sport and Physical Activity. Helping others to flourish through movement.

3 replies on “The platitude of Tolerance”

Reblogged this on The Echo Chamber.

Good on you for standing up and stating this in such a fine way. I have harboured the same feelings about the concept of tolerance for some years. My thoughts have centred around the idea that tolerance falls well short of the fundamental love and connection that all human beings can feel for one another in an open and informed world. Tolerance is, at best, a stepping stone towards a more thorough and connectionist model of humanity. In our zombified world, faces stuck in iPhone screens, not even looking where we are going, too few of us realise that human consciousness and will is literally connected! We are more than cousins, we are each one small part of a single entity and nowhere in that model is tolerance sufficient.

I want to state two things I have learned recently:

Perhaps Nicky Morgan should read that

2. One of the astronauts who made it to the moon and looked back at the earth said: “From out there on the Moon, international politics look so petty. You want to grab a politician by the scruff of the neck and drag him a quarter of a million miles out and say, ‘Look at that, you son of a bitch.’”
Edgar Mitchel, Apollo 14 astronaut, speaking in People magazine on 8 April 1974.

What I read into this statement is that everything that has ever happened has happened on earth, has happened because human beings made it happened. Every action positive and negative comes from us and we are in control of it. Tolerance of one another sells us far too short of what we can achieve and I whole heartedly support you in telling your students that.

James, thank you for taking the time to share your thoughts and wisdom. It’s good to find that there are other PE Teachers out there trying to swim out of the shallow end. I believe that our subject is one where we can actually challenge these prejudices. Especially in sport, in the changing room or around the sports field, we probably have both heard things that young men say. Should we tolerate that? No we need to challenge it, by challenging them. I take your point that tolerance is a stepping stone to caring about our fellow human being, but lets not hold it up as a virtue, but encourage other things life respect, self awareness and open mindedness.

As always I really appreciate your support. It’s good to have people to share these thoughts with.