We seem at times to be always justifying Physical Education’s place within a school’s curriculum. With such a focus on numerical outcomes, learning ‘in’, ‘through’ and ‘about’ movement just doesn’t seem to carry much weight at the moment. As if a holistic view of education in school might be such a terrible thing. So in response to budget cuts and narrowing curriculums we start to shout loudly about the other things PE bring to the education party.

A simple search online for ‘what are the benefits of physical education‘ will show you that PE develops the following:

These along with a never ending list of character traits and soft skills that businesses and employers say pupils are leaving school  without will be highlighted as multiple reasons why we should have PE in the curriculum (let alone the links to improved attainment). Whilst I truly believe in some and there is research and evidence to support a few, others at best are highly debatable or worst just down right silly. However developing team work in PE must be one everyone can agree with surely?

Patrick Lencioni opens his leadership fable, The Five Dysfunctions of a Team (2002) with “Not finance. Not strategy. Not technology. It is teamwork that remains the ultimate competitive advantage, both because it is so powerful and so rare ”. I would agree with that from my own personal experiences, but what is team work? The combined efforts and action of a group, especially when effective and efficient, to achieve a common purpose or goal. We must do that all the time in PE? Our pupils are always provided the opportunity to work in teams through games or other team based physical activities, so therefore we must be developing the skills and abilities to work effectively in a team. PE must be ensuring that pupils understand what is required to be part of a team and how to overcome the obstacles that prevent team work?

Teams are a common feature of most secondary school physical education curriculums. However a team in PE is often very short lived. Think back to your last lesson, did your pupils work in a team? Yes? How long did they work as a team for in that lesson? The whole lesson? An extended part of that lesson or not even that? When have you provided a group of pupils the chance to stay as part of a team for an extended period of time? If we do not offer this, then are all we are really providing is multiple chances of group work? 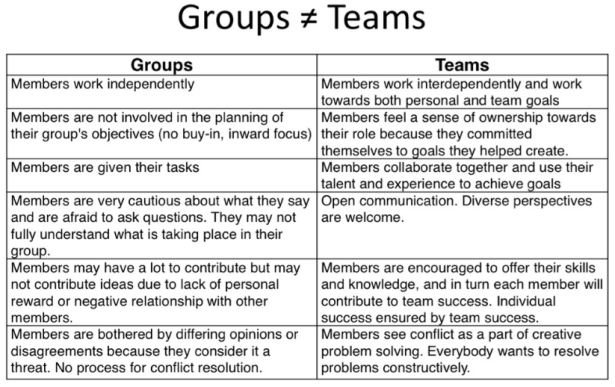 Teams take time to grow and develop. Bruce Tuckman introduced the phases of team growth model (1965). Tuckman’s analysis concluded that successful teams work through four developmental phases of growth, known as Forming, Storming, Norming and Performing. His theory, referred to as “Tuckman’s Stages” was based on research he conducted on team dynamics. He believed from his analysis that these stages are inevitable in order for a team to grow to the point where they are functioning effectively together and delivering high quality results. In 1977, Tuckman, jointly with Mary Ann Jensen, added a fifth stage to the 4 stages: “Adjourning.”

In reality I’m sure most of the ‘teams’ that are made in PE are never more than working groups that don’t get past the forming stage.  This is where everything about the team from purpose to roles is vague, leading to the team lacking coherent procedures and personal relationships, which have not yet had time to evolve or mature. It is the phase where the team tries to align and define itself. Tuckman suggested that in the formation stage the motivation of the team is high but performance is low. To provide our pupils the opportunity to understand how a team forms and develops we must allow time for them to go through the storming stage where they might ‘collide’ for the first time. Through the process of alignment conflicts arise. This many have a negative impact on the team where it could start to lose focus as the members focus on themselves. Uncooperative behaviour may appear and prevent the pupils within team from working together to their potential. This is where we might be able to teach them how to behave in these situations and overcome the issues they face to get to the norming phase. This where the roles, procedures and relationships of the team become clearer. This in effect ensures that the work of the team is done in a productive and effective manner. All individual members of the team accept their own and others responsibilities, which in turn leads to an increase of commitment, and effectiveness of the team.

There is no capacity to develop a team and provide the opportunities for us to teach our pupils the skills and behaviours of teamwork if the team is disbanded at the end of the lesson and a new one formed in the next. So how can we furnish that team experience and opportunity for our pupils within PE? Through the use of certain models based approaches, being part of a team, becomes a significant aspect of the physical education experience. Sport Education, is a well researched and evidenced teaching approach, that ensures we provide pupils with a chance to develop team work. Even if the team loses within that lesson, there is another game to focus on in the next. The next game is a great way of keeping motivation or purpose high within pupils, which if given time, can over come frustrations experienced and channeled into team and individual improvements. If combined with a Teaching Personal and Social Responsibility approach, it can allow the teacher to help guide the pupils, through self reflection, beyond the conflict. Both pupil designed games and co-operative learning approaches are also a great way to develop team work, providing the teacher keeps the teams together for the duration of the unit and works with them to overcome the problems they face. Even making teams within your PE class at the beginning of the year for organisation and management purposes provides extended time together working in teams.

Progress as individuals in a team, development as an effective team and learning through being part of a team all take considerable time. Time where interest must be maintained and effort must be sustained. Models based approaches can provide this. Whether the experiences our pupils have within those teams are transferable to other domains outside of the PE classroom is open for debate.  However if you are advocating for PE by saying it develops team work skills, ask yourself the question ‘am I providing the time and opportunities for my pupils to develop as part of a team?’ in the first place.

Lecturer in PE, Sport and Physical Activity. Helping others to flourish through movement.

Good reflective question and important to consider the development of the skills that contribute to teamwork. Sports ed is a great model but I find focus on interpersonal skills is hugely beneficial as is tpsr running throughout the year.

Thanks Karen. I just think if we are going to promote our subject on the back of developing teamwork and the skills related to being part of an effective team, then we need to at least provide the opportunity.

Reblogged this on The Echo Chamber.

We as educators can’t assume that teamwork, and all the skills necessary for teamwork to be effective, will occur by simply putting students in teams. There needs to be time for students to work through differences and obstacles but, we as educators, need to explicitly teach many of the interpersonal skills necessary for a team to work effectively. Provide time for students to debrief and explain the problems that arise when working with their team and come up with strategies to help students work through adversity. Obviously this looks different from K-12; a lot more explicit teaching will be necessary at earlier years. And I am not just referring to working through problems but I’m speaking about things like taking turns to speak, listening to others, looking at others when they are speaking, etc.

Hi Marcus. Thank you for these comments. There is a lot I agree with here. Your point about modelling what good teamwork looks like and structuring a direct approach for children to work through the issues that arise from being part of team is essential. Is there anything you have learned from your teaching that would help others in developing this further?

A great article. As educators we have to focus on the competencies that underline team-work; the personal and social responsibilities piece. I use Steven Covey’s 7 habits in my classes as a foundation for independent and interdependent skills.

It has to be part of our assessment