Recently my line manager came to observe me coaching as part of my performance management review as Director of Sport. The session he decided to choose to watch was an U12 cricket training session after school. The focus of the session was around the principles of play for the fielding side, specifically working on developing the motor skills of stopping, catching and throwing with decision making whilst under pressure. I had adapted a game that Ian Renshaw wrote about in Non-Linear Pedagogy in Skill Acquisition called the double play game.

My version of the game (called Double out) is this:

It is a pairs game for 8 players. 2 players bat, 2 players feed the ball and act as a wicket keeper and 4 others field. The ball is fed, under arm, one bounce to the batsman who has to hit it forward of the wicket. The batting pair must run two runs when the ball is hit and for the fielding side to get the batting pair out they must either run both batters out or run one batter out twice (at both ends). Being bowled, caught out or hitting the ball behind the wicket meant the batting pair lost a run and the batters swapped ends, but stayed in batting. On top of this there was a boundary and the batters were not allowed to hit the ball out of the boundary. This again would result in a run being lost and batters swapping ends. The feeding/wicket keeper pair both feed the ball for an over each and then swap with another fielding pair. 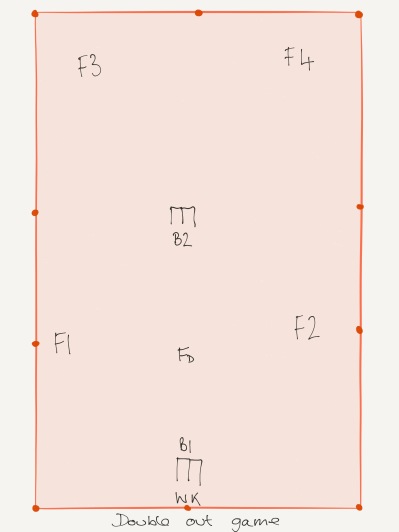 Key for the Double Out Game:

The game was demonstrated to the players and they were allowed to ask any questions. They were then sent off into their groups to start playing the game as quickly as possible. To begin with I just observed the children playing the game and working what was needed out. I only stepped in if the rules needed clarification. The standard of the fielding techniques and decision making were poor to begin with. After 10 minutes I started to coach. I did this mainly in three ways:

I wanted at one point to stop an entire group and drill them on picking up a rolling ball as they were all struggling with this. I decided against it, but felt at the time (and still on reflection) it might have had merit for the development of individuals within that group. I also intermittently asked groups to stop playing and to pair, discuss and share reasons why the fielders were being successful/unsuccessful in running the batters out. Over the course of the session the standard and success of the fielders improved dramatically. The accuracy of the throwing had improved. The fielders were attacking the ball, communicated clearly with each other, backing up to prevent over throws and making better decision under pressure.

Movement learning is much harder to see. It doesn’t usually take place in one session. If it happens at all it will usually take place much later on. We can see movement learning when there is retention or transfer. The key questions to ask would be can the children replicate that movement at a later date? Can they replicate or adapt in an different environment or under pressure in a house or school fixture? Can we see them use these types of stops, catches and throws when playing another striking and fielding activity such as softball? If movement learning has taken place then the children should hopefully possess a longer lasting and more durable performance change that can be positively used in a number of different activities and environments.

What we usually observe through our teaching and coaching is an improvement of movement performance. If a week, a month, term or year down the line the child is unable to replicate that movement then learning has not occurred. It is important to be aware of the difference between movement learning and movement performance. It affects our feedback, our practices, our assessment and how we interact with children in physical activity and youth sport. It impacts our entire approach, especially patience. As coaches of youth sport and teachers of PE, one of our key responsibilities (if not the key) is to elicit a long lasting movement learning change in children where we can, not just to improve their movement performance. This in turn builds the child’s competency leading to higher levels of confidence and a better chance of engaging in purposeful physical activity well beyond our classrooms and their time with us at school.

I asked my line manager to return when we played house cricket in the last week of term and judge whether movement learning had occurred then.

Lecturer in PE, Sport and Physical Activity. Helping others to flourish through movement. View all posts by @ImSporticus