Between Monday 25th July and Wednesday 27th July 2016 I attended the Teaching Games for Understanding Conference in Cologne, Germany. This is the second in a series of posts that will form a collection of the knowledge shared by the presenters along with some of my own personal thoughts and questions. The first post, TGfU Takeaways #1, looked at the philosophy that underpins TGfU and how Ecological Dynamics might provide a coherent learning theory to support game centred approaches.

Shane took us through a practical demonstration of the Game Sense approach using Tennis, specifically we were looking at the Australian Hot Shots programme. A Game Sense approach is an explicit but flexible game centred approach to teaching sports. However unlike TGfU and the Tactical Games model (its English and American cousins) Game Sense couples both technical and tactical ability. This is based on the view that they are inextricable from each other and the information generated when playing a game is needed to produce the movement we refer to as skill. Essentially it couples learning sports specific movements within the context of the game so that the players can develop information-movement coupling that is essential for skill to develop. 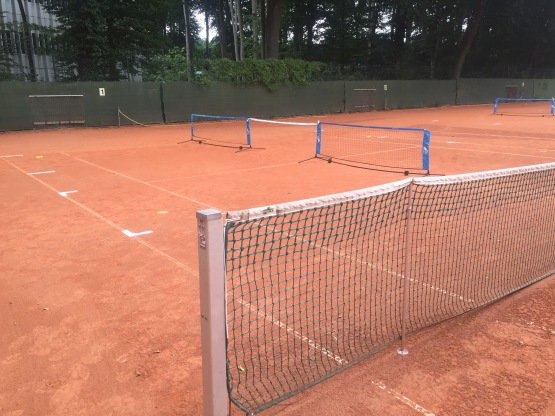 Game Sense games modify the constraints to help focus the players attention on the information that is important to further development of understanding and skill execution. We played on modified courts with modified equipment. The rackets were smaller and the tennis ball a lower pressure. This had the impact of the ball not flying away and spending time chasing for it. It allowed us to concentrate on the game at hand, greatly increasing playing time and enjoyment.

An example of the numerous games we played was one called Freeze. The explicit focus of this game was to get the players to think about how to exploit space. It was played with a ball but no racquets.  One player would underarm throw the ball over the net, but within the playing area. The opponent would need to try and catch the ball either on the full or after one bounce. The key rule is you are frozen in place on your side of the court till your opponent underarm throws the ball. This then provides the opportunity for players think about where to place the ball that would be difficult for their opponent to catch.

A Game Sense approach requires you as the teacher to design games that reduce the the demands of the adult version of it. By being clear about learning outcomes and questioning the players about the success of their play we can we can encourage a particular behaviour and explore ‘moments of advantage’ that they can exploit.

Thoughts and Questions: The session was a lot of fun and I wish more professional development was this practical. To experience as the learner would is a powerful way to both adapt your way of teaching and to ask better questions of your current practice. Theory is all well and good, but it doesn’t beat a practical session by an expert, that shows you how they implement that theory into practice. I took two key things away from Shane’s session. Firstly how clear and explicit the learning outcomes of each game we played were. He made it clear that Game Sense is not a ‘roll out the ball’ approach to teaching sports, but a very structured environment of, (to coin a phrase from Shane), playing with purpose. The second thing was regarding his questioning. He didn’t require an immediate answer (or an answer at all on a few occasions). He was using questioning to highlight a certain aspect of play or key information that needed to be focused on within the game. These are both things I believe I could bring to my teaching of sports to make the learning more effective.

I’m finding more and more that my learning from conferences doesn’t happen within the presentations, but the moments between them. Usually in dialogue with people who are willing to share their knowledge and experience, if you are willing to listen. One such moment happened at the conference with Ian. He was kind enough to listen to my current approach in teaching sport. Primarily I would use a bastardised game centred approach as my default and then if an individual or small group were struggling, I would reduce demands of the game. If however they still struggled I would withdraw them and give them an isolated task.

For example if a group of students were playing a 3 v 3 football game that focused on dribbling and beating players and they were struggling I might make it 4 v 2. If a child still struggled I would the individual out and give them an isolated practice to focus on before putting them back into the game. Ian challenged my thinking on this. He asked whether when taking a student ‘out of the game’ I could still make that practice as representative as possible? Better to go 1 v 1 games that include both the technique and decision making.

Thoughts and Questions: Therefore perhaps a possible solution using Ian’s thinking would look more like this:

Ian finished our conversation with a question that was testing. “If they really struggle with the 1 v 1 situations you create are they really ready for the game?” I’ve never thought about this before. Over the past few weeks I have often pondered Ian’s question but don’t really have any sort of answer. If I did agree, what do I need to be doing with them as teacher that would best support their development and learning?

Lecturer in PE, Sport and Physical Activity. Helping others to flourish through movement. View all posts by @ImSporticus